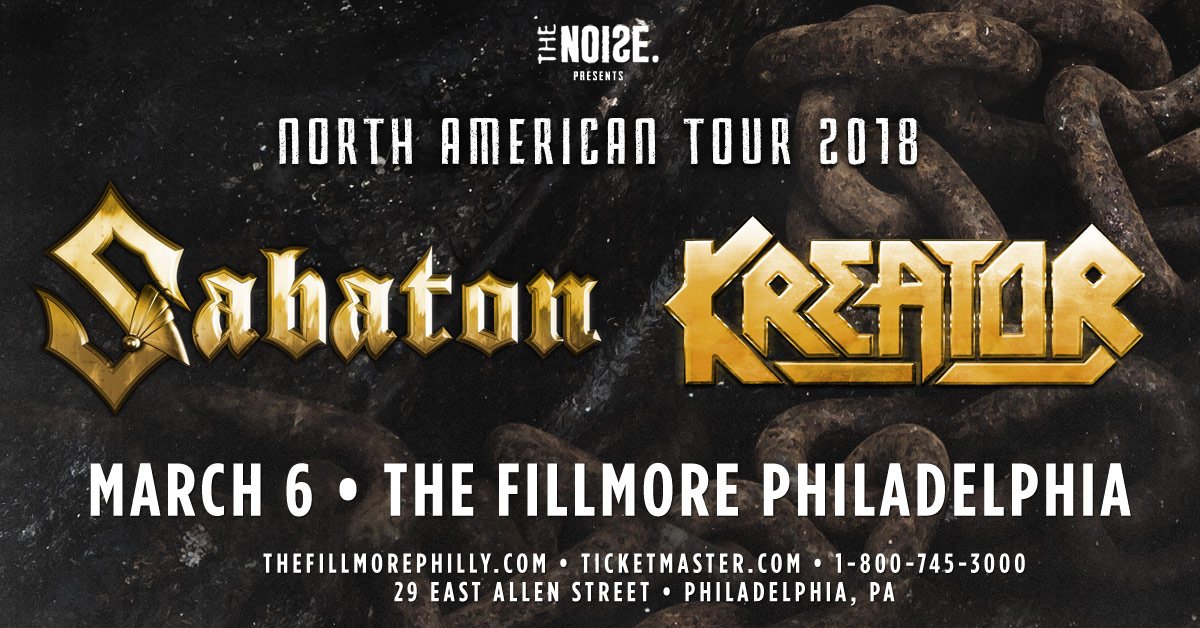 I know I mentioned this band in a post last year and how wonderful their historical songs were.  Well, they’re on tour right now, and they’ll be in Philadelphia in March, just in time for my birthday!  My younger brother and I said we wanted to go see them, but when no plans were made, I honestly thought that nothing was going to come of it, and just settled to take my actual birth day off from work (school will be on spring break during that week, so that was already covered).

Last week, my brother suddenly calls me into his room and says, “I want to get our tickets and hotel room for Sabaton in March.”  I was stunned.

“I thought we weren’t doing that,” I said.

“We’re not missing them being so close to us,” my brother said and got on their website.  We found the cheapest tickets and he purchased both of them with an, “Happy early Birthday.”  We then looked up our hotel, which is about 7-10 minutes away from the venue where the concert is being held.  Once he got that, I marked it in my calendar.  He then said, “Oooh!  We’re on the border of Jersey.  We can visit our friend.”  He rang him up, asked him for his address and told him to keep his calendar for March 7th open.  So, we have a trip planned in early of March for a concert and to see our buddy.  It will be an early birthday present, and we can say hi to our friend, whom we haven’t seen we went to Cedar Point last summer.  Needless to say, I’m very excited!

It was earlier this year when I first heard a song from Sabaton.  My brother dragged me into his room and insisted on introducing me to a new band he had found.  He pulled up a video on Youtube and pressed play.  At first, I didn’t know what was going on, then I heard the bells, then, the music started.  I listened to the lyrics and found myself curious as to what they meant.  My brother explained that the band wrote songs about historical events.  This one was about the Sack of Rome in 1527 and the last stand of the 189 Papal Swiss Guard.  Here is the link to the video:

The lyrics are moving and the melody thrums through your veins.  At least it did for me.  After that song, my brother showed one or two more, but others I looked up on my own.  I was excited when I saw the songs they had and the historical significance they all had.  Here is a list of some of their songs:

And they have plenty of others.  Some of the songs are also sung in another language and it is haunting.  The Ruina Imperii is an excellent example of that.

It is about the return march of the Swedish soldiers from Norway after Charles XII, Carolus Rex, was mysteriously shot in the midst of a siege.  It just gets into my head and I start humming and singing whenever I’m at work.  I’m sure some of my co-workers see me walking around, mouthing something, and say, “What the hell is that girl saying now?”

I don’t recommend the songs if you are an older person (with hearing aids) and don’t like heavy metal.  But, if you do enjoy heavy metal and learning something inside a good melody, you should listen to Sabaton.  And if you live in the US, pay attention!  They’ll be visiting us next year!